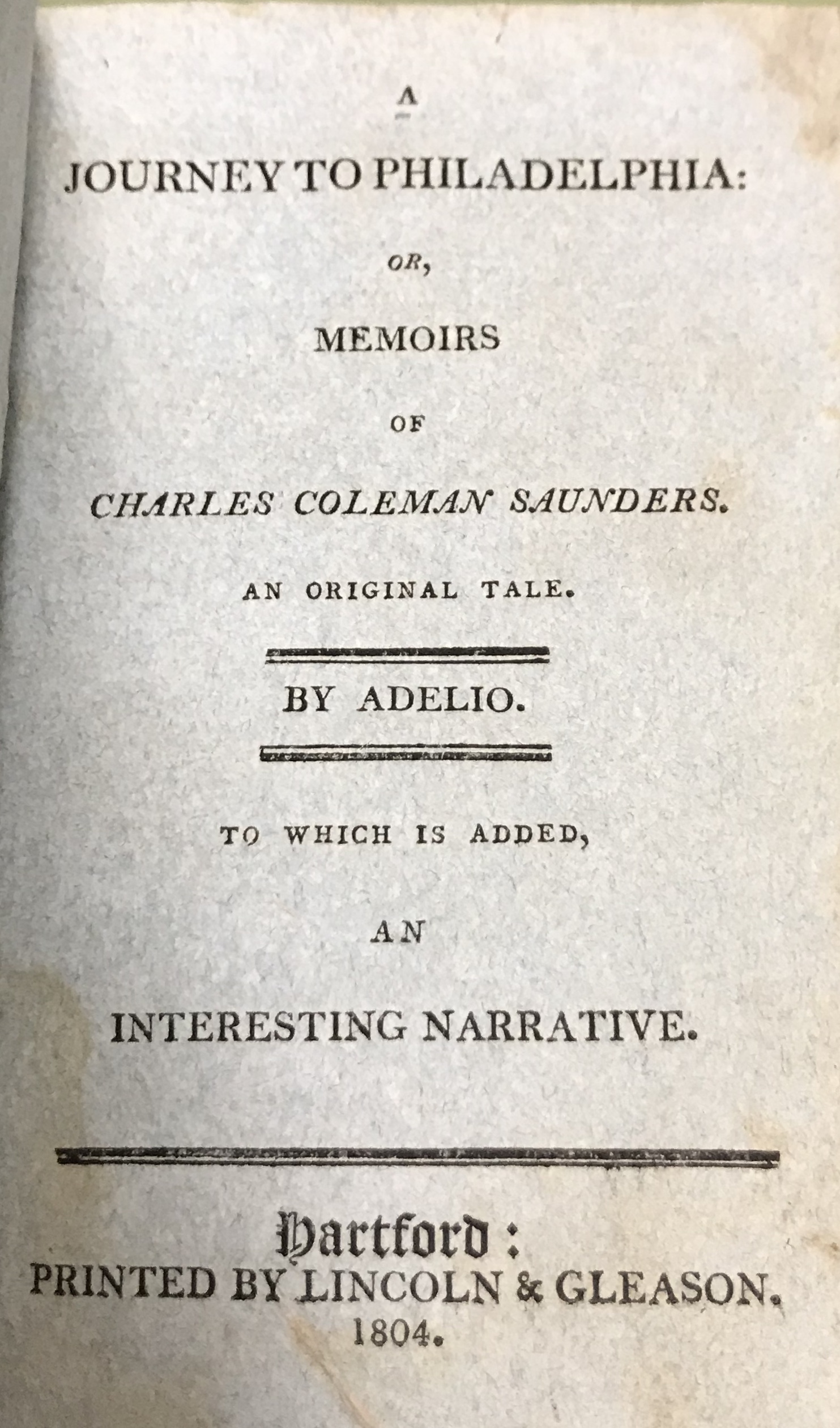 This anonymous novella appeared in six installments in the Philadelphia Repository and Weekly Register, an 8-page paper published most Saturdays from late 1800 to the end of 1804.  The Repository published some contemporary political news, and early on reported local births and deaths, but by and large it was a literary magazine, reprinting new European works, presenting original US works, offering excerpts from contemporary critics, and providing a venue for the publication of a wide range of poetry.  In 1804, for example, the paper reprinted French tales (like Gabriel Legouvé’s anti-revolutionary “Fortitude,” and Bricaire de la Dixmerie’s “Azakia”), a number of Oriental tales (like “Arabian Anecdotes”), and a long British novel, the anonymous History of Netterville, a Chance Pedestrian, first published in 1802.  It also published several series of literary essays (e.g., “The Scribler,” “The Mediator,” “Juvenis Serenus”), excerpts from recent biographies (of historian Edward Gibbon and Napoleon, among others), extracts from a recent travel book about Ceylon (present-day Sri Lanka), an announcement of the German astronomer Wilhelm Olber’s discovery of the planet Hercules, and an essay about theories about the yellow fever.  An anti-slavery essay, reprinted from a Delaware newspaper, by one “Timothy Spintext,” also appeared, as did some advertising for anti-slavery writing by Irish immigrant and abolitionist Thomas Branagan.  Each issue also ended with a poetry section titled “Temple of the Muses,” much of the material for which appears to have come from local contributors.  Among the poetry contributors was someone adopting the pen-name “Adelio,” who also participated in a readers’ debate about the virtues of the marriage institution.  The writer adopted the masculine pronoun, though it’s not clear Adelio was a man: Adelio defended marriage, pointedly criticizing the misogyny of the anti-marriage advocates.  It is likely this “Adelio” is the same writer who submitted the novella A Journey to Philadelphia; or, Memoirs of Charles Coleman Saunders for publication in the paper’s spring issues.

Whatever Adelio’s identity, we can clearly see a familiarity with the writing of Philadelphia’s well-known novelist Charles Brockden Brown.  Brown had published a number of novels or portions of novels in book and serial format, becoming a unique literary voice.  His writings have often been labeled “gothic,” though they differed significantly from the gothic fiction imported from Europe, by authors like Ann Radcliffe, Matthew Lewis, or William Beckford, with exotic, often medieval locales and supernatural phenomena.  Brown often showed an interest in some paranormal phenomenon–ventriloquism, sleep-walking, doubling, extreme isolation–around which he would construct a narrative of uncertainty and suspense, frequently with episodes of violence, confusion, and persecution.  Intensive self-questioning, consideration of multiple possibilities, feelings of helplessness and resignation alternating with altruistic activism, mistaken identities–all of these were recognizable characteristics of most of Brown’s fiction.  It’s possible that Adelio’s titular character alludes to Brown, but unquestionable allusions to Brown’s writings dot the narrative: a reference to sleep-walking, a surprising double, the ambitious rustic who comes to the city, the mysterious persecutor, the false accusation, the heightening and dampening of emotion.  Even the character names seem to allude to Brown, the villainous Carnell echoing Brown’s character Carwin.  A Journey to Philadelphia thus encapsulates what one ambitious reader found to be the most powerful elements of a favorite writer.

It’s unclear how popular Adelio’s narrative was, although it was reprinted later in 1804 in Hartford, CT.   (Published by Lincoln and Gleason, it was packaged with a novella of the 1770s, the Welsh author Elizabeth Griffith’s “The Story of Miss Williams,” retitled “An Interesting Narrative.”)  But it may have resonated as a tale of the dangers of the transition from country to city.  While it’s true that the persecution and perceived violence happens in the country, it’s in the city that Charles is arrested and subject to the punishment of impersonal institutions.   In that respect, the story’s final note may strike modern readers as odd: “fame is not always the portion of merit, [and] that to deserve the esteem of mankind, was a superior enjoyment to an enlarged mind, than distinction or fame could bestow.”  These final lines, at least, suggest the dangers of being known, a peril all the more vexing in an urban environment in which notoriety may mean crowds gathered at the gallows.

Perhaps the earliest scholarly engagement with A Journey to Philadelphia appears in Henri Petter’s The Early American Novel, in which he labels the text “a confession narrative”; see Petter, The Early American Novel (Ohio State University Press, 1971), 324. While Petter notes the text’s failure to fully elucidate the source of Carnell’s anger, he nonetheless declares that “Saunder’s tendency to brood over what happens to him makes a plausible and adequate sense of mystery result simply from the combination of consistent hostility and accidental discredit” (324). In a broad ranging discussion of the early American gothic, Cathy Davidson notes how A Journey to Philadelphia borrows “all too obviously from the work of Charles Brockden Brown,” especially given how Carnell, for example, “combines the worst features of Carwin [from Wieland], Clithero (from Edgar Huntly), and Colden (from Jane Talbot)”; see Davidson, Revolution and the Word (Oxford University Press, 1986), 235.

As many critics have noted, the Gothic stands as one of the most important and widely circulating genres of late eighteenth and early nineteenth Anglo-American print culture. Important studies of the American gothic include, Leslie Fiedler’s Love and Death in the American Novel (Vintage, 1960), Donald A. Ringe’s American Gothic: Imagination and Reason in Nineteenth-Century Fiction (University of Kentucky Press,1982), Davidson’s Revolution and the Word (1986), Teresa A. Goddu’s Gothic America: Narrative, History, and Nation (Columbia University Press, 1997), and Siân Silyn Roberts’s important new book Gothic Subjects: The Transformation of Individualism in American Fiction, 1790-1861 (University of Pennsylvania Press, 2014).

In his trans-Atlantic study of the evolution of gothic tropes and motifs, Fred Botting argues that at its core the “Gothic signifies a writing of excess,” noting that “gothic atmospheres – gloomy and mysterious – have repeatedly signaled the disturbing return of pasts upon presents and evoked emotions of terror and laughter;” see Botting, Gothic (Routledge, 1996), 1. In her incisive overview of American gothic criticism since the publication of Fiedler’s landmark volume Love and Death in 1960, Siân Silyn Roberts argues that while “the Gothic is notoriously resistant to generic classification,” it has remained fundamental to studies of early American literature since it has long been privileged as the key genre for encoding “in narrative form, the ‘special guilts’ of American experience, chiefly slavery, land dispossession, and revolutionary patricide;” see, Silyn Roberts, “A Transnational Perspective on American Gothic Criticism,” in Transnational Gothic: Literary and Social Exchanges in the Long Nineteenth Century (Ashgate, 2013) 21, 19. Noting this critical tendency “to claim that American culture is ‘drenched in gothic sensibility,’” Marilyn Michaud registers how “ardently critics feel the need to explain the persistence of the form in a political and cultural environment seemingly divorced from traditional Gothic impulses” by turning to “psychology” as a means of locating the Gothic within the United States; see, Michaud, Republicanism and the American Gothic (University of Wales Press, 2009), 2.

Other useful entry points to the importance of the gothic in early American print culture include Leonard Tennenhouse’s “Is There An Early American Novel?,” Novel: A Forum on Fiction 40:1-2 (2007), 5-17; Faye Ringel’s essay “Early American Gothic (Puritan and New Republic)” and Elizabeth Jane Wall Hinds’ essay “American Frontier Gothic,” both in The Cambridge Companion to American Gothic, ed. Jeffrey Weinstock (Cambridge University Press, 2017). Finally, in an intriguing essay focused on Gothic serial publications, Douglass H. Thomson and Diane Long Hoeveler argue that “shorter versions of the Gothic,” especially chapbooks and serialized magazine tales, “were far more affordable than a multi-volume Gothic novel,” and that these shorter texts were therefore intentionally aimed at “the newly literate working class” and thus often featured plots which highlight the struggles of working class individuals who are plagued by the machinations of wealthier protagonists; see, Thomson & Hoeveler, “To Make A Long Story Short: Varieties of Shorter Gothic Tales and Ballads,” in Romantic Gothic: An Edinburgh Companion (Edinburgh University Press, 2016), 148-166.

For more information on the history of Philadelphia Repository and Weekly Register we recommend chapter three, “Nature of the Magazine of the Second Period,” of Frank Luther Mott’s A History of American Magazines: 1741-1850 (Harvard University Press, 1957), which traces the growth of regional literary magazines during the first two decades of the nineteenth century. For a more recent and generative history of early U.S. seriality, we recommend Jared Gardner’s indispensable The Rise and Fall of Early American Magazine Culture (University of Illinois Press, 2012).