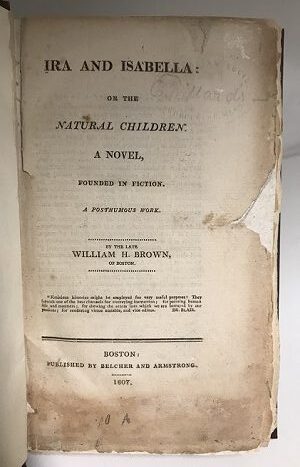 Brown had extensive literary ambitions from a young age.  He was apparently inspired and encouraged by his aunt, Katherine Byles (1753-1833), granddaughter of the prolific clergyman satirist and poet Mather Byles (1706-1788).[1] By the age of twenty-three or -four, he had (anonymously) authored one of the first US novels, The Power of Sympathy (1789) and the short tale “Harriot: Or, The Domestick Reconciliation” (Massachusetts Magazine, 1789).  He also published a number of poems and songs, including the libretto for the comic “The Better Sort: Or, The Girl of Spirit. An Operatical, Comical Farce” (1789) and the tragic West Point Preserved or the Treason of Arnold (posthumously published, 1789), and authored two series of essays, published in Boston, under the monikers “The Reformer” (1789-90) and “The Yankee” (1790).  All of these works were left unsigned, as were some shorter poems and essays published during a stay in North Carolina, where his sister lived. Brown died suddenly in North Carolina in 1793, and though we do not have firm evidence, it is possible that he wrote Ira and Isabella there.  In any event, the manuscript remained unpublished until its posthumous appearance in Boston in 1807, apparently promoted by friends or family who wanted to highlight Brown’s literary achievements.

In Ira and Isabella, these literary ambitions are abundantly apparent.  The preface poses a number of questions focused less on the moral aim of the novella than on the literary craftsmanship and taste.  The narrative voice wonders about the “taste of the times,” the use of fantasy devices (like fairies) or shocking events in plot resolution, the challenges of distinguishing characters’ voices, and the problem of convention and novelty, and concludes with an elaborate, possibly satirical, chart about how to evaluate novelists.  In addition to the Spanish Miguel de Cervantes and two Swiss writers (Salomon Gessner, writing in German, and Jean-Jacques Rousseau, writing in French), the preface cites six French authors, from the long-popular François Fénelon and Voltaire (François-Marie Arouet) to the more contemporary Jean-François Marmontel and Madame de Genlis (Stéphanie Félicité du Crest de Saint-Aubin). The remaining nine authors are British, from the Scottish Tobias Smollett to the Anglo-Irish Jonathan Swift and Laurence Sterne to English writers like Samuel Johnson and Samuel Richardson.  The range extends from the 16C François Rabelais and Cervantes to Charlotte Turner Smith and Frances Burney, whose novels would have been just recently available in North America. It may be worth noting, as well, that in the quantitative tally of literary qualities offered here, the top five scores are awarded to Johnson (122), Swift (121), Cervantes (117), Voltaire (116), and Sterne (113)–with the exception of Johnson, all writers well-known for their comic works.  Throughout Ira and Isabella, Brown explicitly references an additional seventeen authors while implicitly alluding to four others. William Shakespeare is mentioned or referenced no less than six times.  Familiarity with the literary world is always assumed.

As for the narrative itself, Ira and Isabella move through episodes with characters whose names seem to allude to different subgenres of fiction, from the allusive names of 18C comic adventure stories (the Savage family, opening and closing the narrative) to the pastoral romances with more Mediterranean settings (the Lorenzo exchange about true love) to the steamier tales of rakes (the Florio exchange about sexuality) and the more realist tales of surreptitious birth (the tale around Dr. Joseph and “the Nurse”).  It is as if the novella is playing with different conventions and literary modes from scene to scene. And in sharp contrast to the convention that illicit sexual behavior must be punished with death, the novel takes a jab at “the moral opinions of those novelists” and depicts Lucinda quite happily carrying on with her life.

It is this happy ending that may be most surprising.  Much of the familiar literature of the period adhered to sentimental conventions, frequently ending with tragic deaths or, at the very least, with tears.  By contrast, Ira and Isabella sets up several scenes of emotional tension only to resolve them comically.  As is common to much comic writing of the 18C, sexuality is understood as a regular feature of the social world, not simply with Lucinda and Mr. Savage but with Isabella herself.  This renders Ira a potentially silly figure, subject throughout the narrative to the corrections of other characters and literary modes. Numerous critics have noted the irony running through the narrative–perhaps Ira’s name itself alludes to this interplay of irony and Isabella.