Given the title of this text, I suppose I should be, well, sincere about how the class went. The students were great, the text was great, but I did not quite meet my own expectations for this particular teaching endeavor. It was not a disaster by any means, but the four 50-minute classes I led on this novel felt more like the rough draft of the classes I would like to teach in the future than ones I was proud to have taught. END_OF_DOCUMENT_TOKEN_TO_BE_REPLACED

I taught Susannah Rowson’s Sincerity in a 200-level early American literature survey course of 30 students in our core curriculum. Marymount is a small, liberal arts college with a sizeable business school, school of education, and a school of health professions, so in our core classes there tend to be only a handful of English majors alongside a majority of students coming from a wide variety of disciplines and perspectives. I was pleasantly surprised by how compelling the novel was for most students in the class. Not only that, the text helped them grasp a number of cultural particularities of the early nineteenth century—the structures of feeling around sexual morality, for example—and it was an excellent example of how a literary text can simultaneously help to sustain and challenge powerful ideological formations. END_OF_DOCUMENT_TOKEN_TO_BE_REPLACED

I taught Sincerity in an upper-level course for English majors on the American Gothic in the long nineteenth-century. The reason for this unusual placement was to get students to think more deliberately about the parameters of the gothic and questions of genre more broadly. My more targeted plan for teaching Rowson’s novel on this syllabus was to examine the relationship between sentimental and gothic literature.

Our initial discussion focused on extreme suffering as an established point of connection between the sentimental and the gothic. Students immediately seized on comparisons between Sarah’s first-person narration and that of the Governess in Henry James’ The Turn of the Screw, Edgar Allan Poe’s narrator in “The Black Cat,” and Charlotte Perkins Gillman’s narrator in “The Yellow Wallpaper.” While I anticipated the connection between Rowson and Gilman, whose story we read in the same unit only the week before, the connections to James and Poe, whom we studied at the beginning of the semester, came as a welcome surprise. This gothic trio, after all, has much more in common than a distressed first-person narrator; each narrator contends with an obtrusive and inexorable superegotistical judge that she or he projects outward: onto a master, a cat, a woman in the wallpaper. These persecutory doubles aid in the destruction or disintegration of the self. While we similarly positioned Anne, Sarah’s correspondent in this epistolary novel, as a figure of externalized conscience, we were more equivocal about Anne’s role in Sarah’s self-formation.

In another discussion, our investigation was guided by Eric Savoy’s insights in “The Face of the Tenant: A Theory of the American Gothic,” an essay that establishes how the gothic must be understood as “fluid tendency rather than a discrete literary ‘mode,’” as an impulse rather than a literary artifact.[i] Through this assertion about the gothic, Savoy underscores motion and incipience rather than a static set of properties or conventions, a tendency he names “the turn.” His concept of “the turn” likewise changes, accruing multiple meanings over the course of the essay. For our purposes, the turn referred to the “change in course or direction” of the sentimental toward the gothic, and further, to the colloquial usage, the “momentary shock caused by sudden alarm, fright, or the like.”[ii] Pulling these two definitions together, we perceived that the unexpected turn from one set of generic expectations to another, from the sentimental to the gothic, had the effect of startling the reader. We noted, moreover, that this disturbance or unsettling also occurred at the level of uncanny resemblance. Both sentimental and gothic narratives take up the issue of domestic discord; but if the former “imagines the happy home as the acme of human bliss,” as Nina Baym puts it, the latter rejects any hope of domestic fulfillment.[iii] The sentimental veers toward the gothic when the unhappy home becomes the unhomely home, when the field of social affiliation becomes the field of the asocial or antisocial. Such moments occur throughout the novel, perhaps most evidently in the section where the Marquis imprisons Sarah, she escapes, wanders on the open road, and someone mistakes her for a ghost.

I thought Sincerity worked really well for exploring the intersections between the sentimental and the gothic and for creating a reflexive structure that allowed us examine how genres often confront their own limits. I would certainly consider including the novel (or even certain sections) on an American Gothic syllabus again, the next time taking up questions of transatlanticism and circulation more explicitly.[iv] 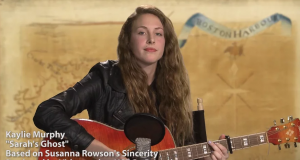 Kaylie’s song inhabits two voices from the American survey. The first stanza takes the perspective of Sarah Darnley, who flees a disastrous marriage and concubinage, wanders down the public road and knocks on a farm house door outside Dublin: END_OF_DOCUMENT_TOKEN_TO_BE_REPLACED

In Fall 2015, I placed the Just Teach One text Sincerity at the center of my American Novel I course.  The “Recovering Sincerity Project,” adapted from a JTO assignment by Jon Blandford, asked students to do the work of literary history and decide whether the novel deserved critical attention and inclusion in courses like ours.

The project spanned most of the semester and included the following phases:

END_OF_DOCUMENT_TOKEN_TO_BE_REPLACED

Before the addition of Sincerity to Just Teach One, the syllabus for my upper-level undergraduate course on American women writers and nineteenth-century reform had always started with either Susanna Rowson’s Charlotte Temple or Hannah Foster’s The Coquette as a means of introducing Republican era concerns and debates before our exploration of such topics as temperance, slavery, Indian removal, education, labor, immigration, health care, and women’s rights. As an alternative selection to Charlotte Temple, Rowson’s Sincerity presented new challenges to students thinking about the relationship between literature and social reform. Whereas Charlotte’s transatlantic passage juxtaposes her English and American identities, the action in Sincerity spans the American Revolution but appears isolated from it. Given its European setting and the characters’ seeming indifference to affairs on the other side of the Atlantic, how might we read Sincerity as an American novel concerned with social reform in the United States? Students examined Sarah’s conflict with European values and traditions, weighing the significance of her flight from England to Ireland, for example, and her fraught relationship to the Marquis of H—. Drawing from critical approaches to other early American novels, we asked whether Sincerity might construct a national allegory with Sarah’s struggle to survive and maintain her ideals while bound to unreliable “protectors.” Many of the issues that Sarah faces, of course, are ones that concerned early advocates of women’s rights—the moral double standard for women and men, the obstacles to women’s employment and economic independence, the pressure upon women to marry at all costs, etc. We explored these connections using the database/journal Women and Social Movements in the United States, 1600-2000, a collection of document projects with primary sources edited and introduced by historians. Students compared Sincerity to other works by Rowson and her contemporaries in Bonnie Laughlin Schultz’s document project How Did Susanna Rowson and Other Reformers Promote Higher Education as an Antidote to Women’s Sexual Vulnerability, 1780-1820? A presentation group selected documents of interest and led discussion of their relevance to Sincerity, focusing upon Rowson’s role as an educator and writer of textbooks, and the novel’s portrayal of Sarah’s own efforts to “teach” herself and others. Students found Sincerity less didactic than Charlotte Temple, in part because of the ambiguity created by the novel’s multivocal epistolarity—a form that also calls attention to the impact of reading and writing upon women’s lives. The course syllabus also paired Sincerity with Jan Lewis’s “The Republican Wife: Virtue and Seduction in the Early Republic” (1987), an essay that worked well to contextualize and problematize Sarah’s character as the “exemplary wife” (versus “mother”). Lewis’s argument sparked animated conversation about Sarah’s relationship to Darnley and the idea that women are responsible for “seducing” men into virtue. As we studied later nineteenth-century American women writers (such as Harriet Beecher Stowe, Harriet Jacobs, and Louisa May Alcott), students continued to make references to Sincerity, using it as a touchstone for considering evolving ideas about women and their role in social reform.

I taught Susanna Rowson’s Sincerity in “Origins of the American Novel,” a once-a-week, 400/500-level seminar on American literature before 1800. The major goal of the course was to consider the causes and effects of early American novelists’ obsession with established British genres. We studied how American novels drew and developed from their British predecessors and considered the American authors’ reasons for writing within these well-worn genres. Sincerity was a particularly effective text for this seminar. END_OF_DOCUMENT_TOKEN_TO_BE_REPLACED

My experience of teaching Susanna Haswell Rowson’s Sincerity in a graduate seminar in the early Atlantic novel was marked by the unexpected. As the initial call for participants noted, this novel defeats the expectations we have for Rowson’s work when we come straight to it from Charlotte Temple: its unsentimental, explicit, and forceful critique of the injustices in the institution of marriage at the start of the nineteenth-century seems worlds away from the tears and exhortations to filial piety in Charlotte Temple, and my students picked up on this rather quickly. END_OF_DOCUMENT_TOKEN_TO_BE_REPLACED

As I did the previous two times I’ve participated in “Just Teach One,” I incorporated this year’s selection into the survey course I offer every fall, which covers American literature from its beginnings through 1865. This course draws mostly majors who are mostly at the sophomore level, though there are always a handful of upperclassmen who didn’t take it earlier and a few intrepid non-majors who take it to fulfill their general education literature requirement. Like any survey, it sacrifices depth for breadth, aiming to familiarize students with a wide range of authors, texts, and critical problems and thus laying the necessary foundation for more sustained inquiry in upper-level courses. END_OF_DOCUMENT_TOKEN_TO_BE_REPLACED

I taught the Just Teach One text Sincerity by Susanna Rowson in two different classes fall 2015 at Drake University. The first course was Approaches to American Literature Before 1900, which I was teaching with a focus on 1820s social issues, and the second was a First Year Seminar on Jane Austen and issues of “property” and “propriety.”    END_OF_DOCUMENT_TOKEN_TO_BE_REPLACED